A Sworn Virgin and a Pink Sister

video installation © 2018 6:34 min. no sound LCD TV in showcase in missionmuseum in Steyl

The video installation “A Sworn Virgin and a Pink Sister” is about sacrifice and pride and covering the body. It shows the silent portraits of two women who both took an important decision during their younger years which was formative for the rest of their lives. At the time, a well-considered and voluntary decision for both, but one that nowadays hardly ever occurs anymore. A way of life which not too long from now will disappear.

On the right-hand screen, we see Lali’s/Diana’s portrait, a ‘sworn virgin’ (‘Burnesha’ in Albanian) from Albania’s patriarchal North. This is an area where societies live according to the ‘Kanun’, a traditional, 15th century code of honour, in which most social privileges only count for men. A ‘sworn virgin’ is a girl/ young woman who takes an oath or vow of chastity in consultation with and in the presence of the community and thereafter goes through life as a boy/ man. That way a sonless family is prevented from losing all its land. At the same time the ‘sworn virgin’ obtains the same liberties as a man has in these societies.

The left-hand screen shows the portrait of Marie Veronique, a so-called ‘Pink Sister’, or a ‘Sister Servant of the Holy Spirit of Perpetual Adoration’. Marie Veronique joined this convent order of mostly German, contemplative nuns when she was a young woman. This congregation was established at the end of the 19th century in the monastery village Steyl in Limburg (county in the south of the Netherlands). The Pink Sisters never or hardly ever come out; there is a stone wall between them and the outside world. They spend their time doing domestic chores and looking after the garden among other things, but their main task is ‘supporting the mission by prayer’. This is what the sisters do day and night, working in shifts for 24 hours, praying for the welfare of the outside world. 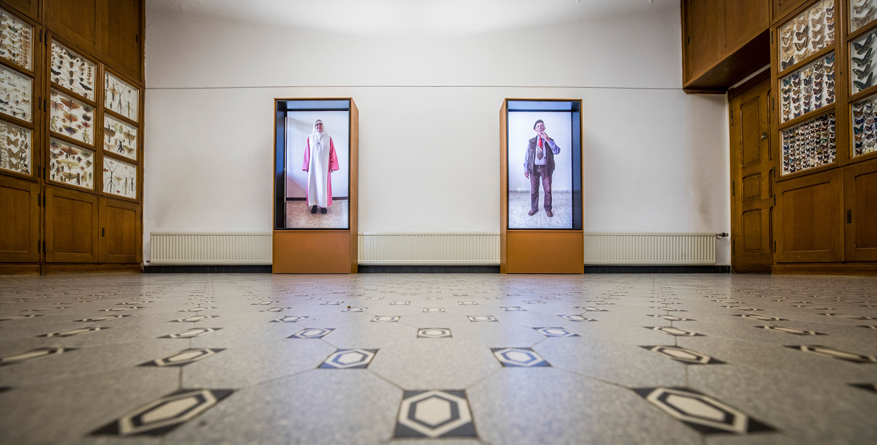 The parallel between both women is undeniable. They both took a far-reaching decision at a young age, both choosing to live as a virgin and in doing so, sacrificing ‘normal’ everyday life. But where Lali’s/ Diana’s choice has gained her more freedom, as she can spend her days leading an active life as a man, Marie Veronique leads a secluded life, away from the outside world.

The still portraits Deinema made of the women are in keeping with the age-old tradition of painted portraits. The women hardly move, which is why the use of a contemporary medium like video has an alienating effect. Only once do they make a self-elected movement. The portraits show a way of life that is no longer from this time; not too long from now, the portraits may be part of a museum heritage collection.

The MissionMuseum in Steyl is the obvious place for exhibiting Deinema’s diptych. The butterfly room, where the work is shown, is a symbolic place that refers to the women’s metamorphoses. Just like the butterflies, the women are placed in a display case. Furthermore, the convent of the ‘Pink Sisters’ is located in Steyl and the atmosphere of the museum takes you back to the end of the 19th century, the beginning of the 20th century, a period in which the choice to live as a ‘sworn virgin’ as well as the choice to live as a nun was more common.

Nynke Deinema makes videos, photos and collages. Man and his incapacity is an overarching theme in her work. She is looking for the edges of life, the peculiarities of the human body and mind. Skin and the covering of skin appear in several of her works, especially the covering of the female body. Deinema grew up in a patriarchal family where the truth was often concealed and important matters were kept silent about. It is exactly because of that, she seems to be drawn to dualistic themes like to conceal and reveal, to attract and repulse, discomfort and comfort and lets womankind in all her facets step into the limelight, as (a small) act of resistance against the patriarchal system.