Bed&Brek in the Van der Pek 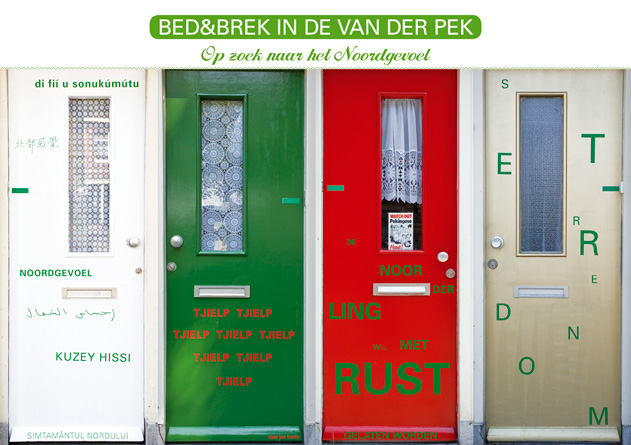 The artproject extended with four more houses of which one has been transformed into a reception lobby. The other three houses all have different themes. In the House of Cultures you will find the interpretation of a conversation the artists had with a group of inhabitants from different cultural and religious backgrounds. The subject was their vision on design arising from their own tradition. In the House of Stars , Dutch celebrities who live or used to live in North performed one evening in the Golden Room which was especially made for them. In the House of Nature you will find, amongst other things, insects that have been captured by an amateur biologist and it has a special garden laid out by a resident of the neighbourhood. Of course you can also still view the house in Anemoonstraat.

Once again it is possible to spend a night. So you can experience the ultimate Northern Feeling of your choice. Would you rather go to bed with a poem of Simon Vinkenoog or do you prefer the sound of a rummaging hedgehog?

A special addition to the project is that visual artists, writers and musicians are invited to stay in one of the houses for a whole week. In return they leave an artwork behind at the reception with the theme, Northern Feeling. Thus the ‘Bed en Brek in de Van der Pek’ is the shortest Artist in Residence in the world. Management and exploitation of ‘Bed & Brek in de Van der Pek’ is in the hands of Work Experience Company BSN. That way the project also provides work experience places for people who are having a hard time on the labour market.

the House of Stars , Dutch celebrities who live or used to live in North performed one evening in the Golden Room which was especially made for them.

Embroiding the brains
Drowning in blankets
→
←